Solidarity and the intersection of World Refugee Day and Juneteenth

July 7, 2022 – It began as a gray overcast Monday and ended with a bright spotlight on hope and unity. On June 20, I participated in the World Refugee Day walk to support immigrants and refugees. More than 120 people from many different cultures and backgrounds came to Portland’s Tom McCall Waterfront Park to recognize and  celebrate the strength and resilience of those who left their countries and made the U.S. their new home. The day also marked the official observance of Juneteenth, a holiday that commemorates the emancipation of enslaved African Americans.

During the walk, I had a chance to reflect on the intersection of World Refugee Day and Juneteenth and the history of cross-cultural solidarity. In the late 1880s to early 1900s, leaders from various groups, particularly the Black and Asian communities, worked together to overcome oppressive laws, such as those enacted during the Jim Crow era and the Chinese Exclusion Act. In 1955, delegates from 29 countries in Africa and Asia convened for what’s now known as the Bandung Conference. They were there to discuss the challenges of a post-colonial world. It was the first time that leaders from so many non-Western countries gathered for a common cause.

The Civil Rights movement in the 60s opened the doors for immigrants of color. A few months after passing the Voting Rights Act, Congress passed the Immigration and Nationality Act of 1964. It abolished the race-based immigration quota and replaced it with a system that prioritized refugees, people with special skills, and those with family members living in the U.S.

Black civil rights leaders also had direct impact on Southeast Asian refugees following the Vietnam War. As thousands of people from Vietnam, Laos and Cambodia suffered in make-shift camps, a group of Black leaders, including Bayard Rustin, Coretta Scott King and Rev. Jesse Jackson, advocated for the refugees to be resettled here in the U.S. In an ad that they published in the New York Times on March 19, 1978, they wrote: “Through our arduous struggle for civil, political and economic rights in America, we have learned a fundamental lesson: the battle against human misery is indivisible. Our continuing struggle for economic and political freedom is inextricably linked to the struggles of Indochinese refugees who also seek freedom. If our government lacks compassion for these dispossessed human beings, it is difficult to believe that the same government can have much compassion for America’s Black minority, or for America’s poor.”

Time and time again, we have seen marginalized communities band together to fight against racial injustice. The group Asian Americans for Black Lives formed in 2014 after a call for solidarity from Black Lives Matter. The United Farm Workers, founded by Cesar Chavez and Dolores Huerta as the National Farm Workers Association, has a long history of cross-racial alliances, including one with the Black Panthers. Members of the union also participated in the Strike for Black Lives in 2020.

These are only a few examples of solidarity from our common history of racial injustice and oppression. It shows us that when we work together, we can make progress toward equality, equity and inclusion for all. 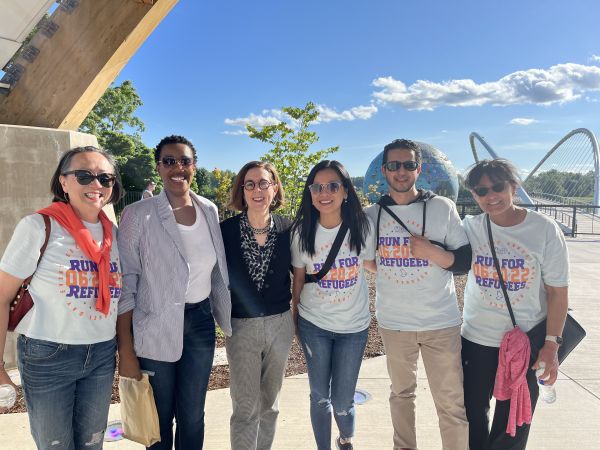 Community leaders from all over the state, including Oregon Governor Kate Brown (3rd from left), participated in the 5K walk on June 20 in Portland, Beaverton and Salem to support immigrants and refugees.