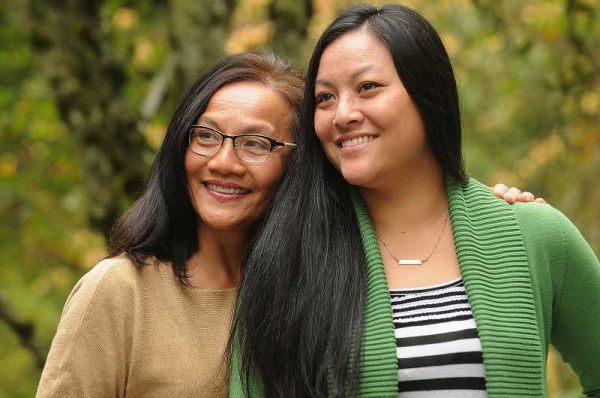 Tam Hixson was born on a fishing dock in a refugee camp in Indonesia to parents who fled from Vietnam in 1979. She doesn’t remember much from those days, "but my mother still has vivid memories as a young woman: escaping a war-torn country, leaving her family behind and being pregnant with her first child."

Hixson now lives in Lake Oswego with her husband Mike and her two young children. The family also has two goldfish "named Chow and Mein," Hixson says. "They joined our family this summer, thanks to Grandma!"

In many ways, Tam and her family live an all-American life. Tam graduated from Santa Clara University, met her husband 13 years ago in San Francisco and worked for several nonprofits before becoming a real estate agent.

She’s deeply involved in the community, as a volunteer and as a member of groups like the Lake Oswego Mother’s Club and the New-to-Portland moms group. And like many local families, the Hixsons enjoy spending time together, often by the Willamette River in George Rogers Park.

But Tam’s path to Lake Oswego was anything but typical.

"We escaped Vietnam in January of 1979 with my husband’s whole family of 48 people," says Tam’s mother, Thu Nguyen, who recently visited her daughter’s home. "The grandma, the parents, the uncle — they all decided we don’t have a future in Vietnam."

Thu was eight months pregnant at the time, and she remembers a harrowing boat trip that took seven days.

"We came to Malaysia first," she recalls. "At that time, they had too many refugees there. They didn’t want any more. So the government of Malaysia kicked us out. We went to Indonesia, and stayed there until the end of the year. We didn’t come to the U.S. because you have to have an American sponsor, someone in the U.S. who has a helping heart."

Little did they know that helping hearts were beating in Spokane.

"Joe and Cherry Kempston had three biological children at that time, but they decided they would go to Catholic Charities and sponsor an immigrant family," Thu says. "But they were only able to sponsor my husband and I and Tam."

Thu says she thinks sometimes about the quirk of fate that made her an American.

"One of my husband’s uncles and his wife and two sons had to go to Australia. A couple of my friends who came before me in the refugee camp stayed there for several years before a sponsor from Germany picked them up," she says. "It’s random. We are very fortunate."

Thu says the transition to a new country was challenging, but she credits the Kempstons for giving her family the foundation it needed and the love and support to succeed.

"The Kempston family did such a good job being a sponsor. I appreciate them," she says. "We stayed at their home for a month, and then they found an apartment for us. They helped us with transportation and going to school. They taught us about the quality of life. They taught us how to raise the kids (in American culture). We are still good friends."

"We were so fortunate to have a sponsor family that really cared about helping us make that transition," she says. "We were very lucky to have a sponsor who was very focused on helping us to assimilate. Teaching my parents how to go grocery shopping, how to handle everyday life, how to function independently in American culture."

The lessons paid off. Tam went on to graduate from Santa Clara University with a bachelor’s in psychology and a master’s in higher-education administration. She has worked with Catholic Community Services in Vancouver and the Insights Teen Parents Program in Portland and is now a real estate broker with Windermere. She chose Windermere, she says, because of the Windermere Foundation, which donates a percentage of all home sales to low-income and homeless families.

"I’m also involved with Partners in Diversity, which is an affiliate of the Portland Business Alliance," she says, "and I volunteer with the World Financial Group’s Financial Literacy Campaign and the Junior League of Portland."

Giving back, she says, is her way of honoring a journey that started on a fishing dock in Indonesia — a journey that could have gone in so many different directions.

"For me, success is knowing I’ve been true to myself, that I haven’t compromised my values or forgotten where I come from," she says, "from recognizing my privilege and the challenges that others experience to giving 100 percent and being my best self, while also contributing what I can to the communities in which I live."

Author Biography
PJ Clark lives in Lake Oswego, where she likes to talk to strangers, eat chocolate, fall off things and collect bruises — and write. Her "In Real Life" column appears regularly in The Review. Contact her at clark_pamela@yahoo.com.