Inclusion is Both a Noun and a Verb 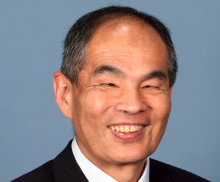 While on the staff at Lane Community College, I was sitting in the stands with my fellow educators watching a faculty basketball game. The director of the physical education department, Dick Nuel, was the referee. Midway through the fourth quarter, Nuel stopped the game and said, "Hanamura, come on down here."  Surprised, I made my way down to the floor where he handed me a whistle and said "You’re the ref for the rest of the game. Just run up and down the court and call a foul on anyone you want."

My initial surprise led to excitement as I realized that I could just make up calls and decide who was doing something wrong even though I didn’t have a clue what was happening! After the second or third whistle the fans began to jeer, boo and hiss. "What’s the matter with you, ref? Are you blind?!  I turned to the crowd with a feigned air of authority and replied, "Yes I am! What’s it to ya?" The jeers went to laughter, and we finished the game with this blind ref calling imagined fouls on unsuspecting players.

What started out as a game turned into something very different – an exercise in inclusion. As a faculty member sitting in the stands with my co-workers, inclusion was a noun.  I was a part of something. When Mr. Nuel invited me down on the court to referee, inclusion became a verb. I was no longer a spectator; I was a participant.

Roosevelt Thomas once said, "diversity is a journey, not a destination."  The journey started as an issue of compliance, then moved to identifying different dimensions of diversity, which became inclusion, then equity, and on to micro-inequities and so on in an ever-evolving process. The words will continue to change, but so too should our ways of thinking about how to be inclusive.

When someone stands in front of you, what do you see? A spectator or a participant?

Author Biography
Steve Hanamura, founder of Hanamura Consulting, Inc, is committed to making a difference in the lives of individuals and organizations. Steve enables organizations to build constructive relationships through collaboration, increased understanding, and new insights. Whether speaking to a thousand or training ten, Steve inspires and changes lives.